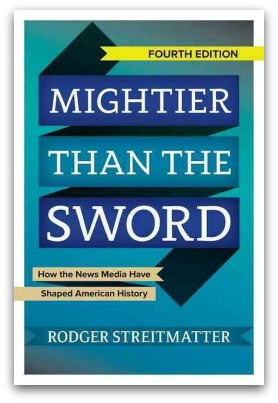 Rodger Streitmatter first published Mightier than the Sword: How the News Media Have Shaped American History in 1997. It was intended to be both a textbook for his popular undergraduate journalism course at American University and a general reader for anyone interested in exploring the news media’s influence on our democracy. In his preface to the fourth edition, published in 2016, Streitmatter attributes the book’s popularity to the readers who “enthusiastically embrace its thesis: for more than two centuries the American news media haven’t merely reported and commented on the news, but they’ve also played a significant role in shaping this country’s history” (ix).

Streitmatter delivers on defending his thesis, with examples of how the news media has both championed and failed the American people, from our country’s founding to present day. Check out the table of contents for sixteen chapters in American history that get the treatment from Streitmatter. Each stands on its own and is designed to be readable and easy to integrate into the classroom. You and your students will recognize some of these chapters – yellow journalism, muckrakers, Watergate – but some are less well known, such as the discrediting of the movement for women’s rights in the mid-nineteenth century, standing up to the Klan in the 1920s, or the role the press played in electing our first African American president.

END_OF_DOCUMENT_TOKEN_TO_BE_REPLACED

Like many people, I’ve spent a good deal of time consuming and avoiding news coverage about the Parkland, Florida school shooting and its political aftermath. We are all heartbroken and angry and upset. A lot of the coverage has been hard, sometimes distracting, and some of it inspiring. I’ve been grateful to journalists for their treatment of the student movement emerging from the shooting’s wake, for giving kids the air time, amplifying their voices, and taking them seriously.

END_OF_DOCUMENT_TOKEN_TO_BE_REPLACED

I want students to have expectations of journalistic standards, which continue to evolve over time but still tend to embody some sense of duty to citizens, the regular folks like you and me. I think it’s important for students to appreciate that tradition of watchdog journalism and how it relates to our democracy. Honestly, this watchdog role is the reason most of us put up with today’s scurrilous news media.  No matter how much they annoy us, we count on journalists to watch out for us, holding the powerful and negligent accountable even if the law fails to do so. This is why we respect the institution of journalism, defend its reputation, but also hold it accountable. I want students to know how to hold their journalists accountable.

END_OF_DOCUMENT_TOKEN_TO_BE_REPLACED 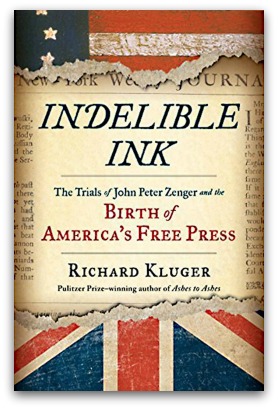 I went into Richard Kluger’s book, Indelible Ink: The Trials of John Peter Zenger and the Birth of America’s Free Press, thinking I was in for a First Amendment origin story. The heroic struggle for free speech. Humble colonial printers pushing back on the crown’s policy of forbidding seditious libel. I got an origin story, but not the one I went looking for. I was expecting a triumphant little-guy story, that feel when you watch a movie like Rudy. Instead I felt like you do after watching Dangerous Liaisons, scandalized and a little sad.

Kluger gives us an account of the trial and ultimate acquittal of John Peter Zenger, printer of the New-York Weekly Journal, who was accused of seditious libel by then governor William Cosby. The colonies had never seen a trial or verdict like this before. The year was 1735. Not long before in England, it was illegal to print anything negative about those in power, whether or not one was printing the truth. The very suggestion of weakness in the ruling class could threaten faith in the social order, and the ruling class wouldn’t allow it. Printing anything even remotely seditious could lead to jail time, the loss of an ear, even death.

END_OF_DOCUMENT_TOKEN_TO_BE_REPLACED

I tried something new with my seventh graders in library class and I want to share it with you.

I imagine that many young people (though not all) have different expectations of journalists than most adults do. I don’t blame them. I rarely thought about the news as a tween or teen. I was fairly self-centered and more interested in my friend group. If students today feel like I did then, are they wondering what the big deal is when I try to arm them with strategies to spot fake news? Do young people know why the grownups are so bent out of shape about fake news? If students don’t interact much with the real news, if they don’t appreciate what the real news is supposed to do, then why should they worry about fake news?

I thought it couldn’t hurt if students asked their parents what they thought of the news. Maybe a conversation with an authority at home would put future news literacy lessons in context. I also like any kind of assignment that gets kids interacting with their parents. So I asked my students to record an interview with a parent or someone from a different generation, asking for opinions about the news media.

END_OF_DOCUMENT_TOKEN_TO_BE_REPLACED

Allow me to tell you about a low-stakes, high-impact activity that develops news literacy in students while assessing their ability to think critically about online sources. I do this with my seventh graders every week at the beginning of our library class. The activity works great as a Do-Now or an Exit Ticket. It could also be adapted to classroom practice in almost any content area.

Most school librarians use some type of evaluation mnemonic device to teach source evaluation. You’ve heard of them. You might RADAR, CRAAP, or even FART. I have always liked RADCAB, based on the wonderful work of Karen Christensson, but you can adapt this activity to your favorite evaluation acronym.

END_OF_DOCUMENT_TOKEN_TO_BE_REPLACED 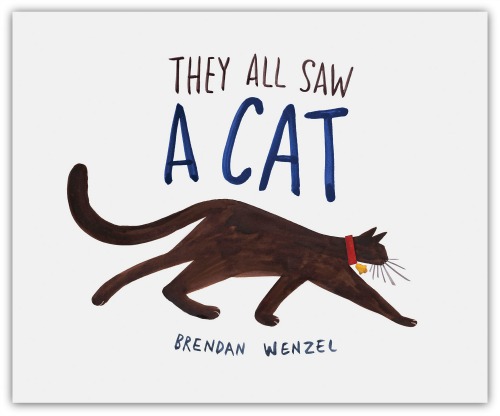 If you read to little ones, you already know about Brendan Wenzel’s Caldecott Honor Book, They All Saw a Cat. The story starts simply enough:

“The cat walked through the world, with its whiskers, ears and paws . . .”

As the cat explores the world, it encounters a boy, a dog, a mouse, and several other creatures who each see the cat in a different way. The illustrations are bold and beautiful and clever. Children and adults will love this book. It’s in the same orbit as The Very Hungry Caterpillar and Where the Wild Things Are. But will seventh graders like it? How can you use the book to introduce them to media literacy?

END_OF_DOCUMENT_TOKEN_TO_BE_REPLACED 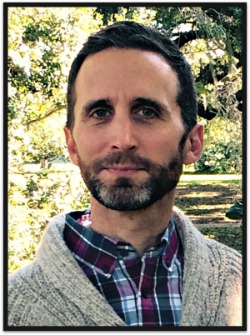 A school librarian researching America’s history with the news media and how shared stories shape our democracy.

The Cardigan Papers is where I think about how this research affects my practice as a librarian, teacher, and citizen.

My thoughts are real and sometimes true.